'This Week in Airline Safety' for 7 November 2014 discusses how the SpaceShipTwo mishap led to a rethinking of how AirSafe.com will look at space related safety and risk. Read the recent AirSafeNews.com article for further details about those changes.

The following is an overview of the crash and accident investigation involving the Virgin Galactic SpaceShipTwo vehicle.

31 October 2014; Scaled Composites; Model 339 (SpaceShipTwo); N339SS; near Cantil, CA: The vehicle, which is designed to fly into the lower reaches of space (above 100 km above Earth) was on its first powered test flight with a new engine fuel and oxidizer combination (nylon and nitrous oxide). SpaceShipTwo was dropped from its carrier vehicle White Knight Two at about 45,000 feet, and ignited its engine.

Roughly fifteen seconds after release from the carrier aircraft White Knight Two, the SpaceShipTwo vehicle experienced an inflight breakup. One of the two crew members, Michael Alsbury, was killed, and the other crew member, Peter Siebold, was able to parachute to safety.

Prior to the accident flight, there had been the 54 test flights of SpaceShipTwo, of which 34 involved a release from the carrier aircraft, including three powered flights.

Scaled Composites, which conducted the flight test, is a partner of Virgin Galactic, which had planned on using SpaceShipTwo to take passengers on suborbital trips into space in the near future.

Summary of the fourth NTSB briefing on 3 November 2014

During the fourth media briefing on the third day of the on site portion of the NTSB investigation of the crash of SpaceShipTwo, the most significant information provided by acting NTSB chair Christopher A. Hart was a general timeline of the events between the release of SpaceShipTwo from its mothership WhiteKnightTwo, and the loss of telemetry from SpaceShipTwo. In that roughly fifteen second span, a number of events occurred inside SpaceShipTwo:

In addition to the timeline, the NTSB stated that lightweight debris was recovered about 30-35 miles northeast of the main wreckage area, and it was not clear what role wind may have played in the distribution of that wreckage. Also, while there was clear evidence that the pilot in the right seat moved the feather lock handle, during the media briefing, Hart was not clear if it was the pilot or the copilot who did so.

Shortly after the media briefing, NTSB clarified its position on Twitter, stating that the copilot, who did not survive the mishap, was the person in the right seat who moved the lock/unlock handle into the unlocked position.

Summary of the third NTSB briefing on 2 November 2014

During the media briefing on the second day of the NTSB investigation of the crash of SpaceShipTwo, acting NTSB chair Christopher A. Hart, reported on some of their early findings that implied that there was no fire, explosion, or other kind of breach or failure involving the engine, fuel tank, or oxidizer tank. Early evidence instead points to an un uncommanded deployment of the feathering system just prior to the loss of telemetry from SpaceShipTwo.

The feathering system on SpaceShipTwo allows the twin booms on the vehicle, referred to as the feathers, to rotate upward in order to provide more aerodynamic drag on reentry. They are intended to be deployed after the engine has shut down and prior to reentry. According the information provided at the briefing, deploying the feathers takes two actions from the flight crew. The feathering system has to first be unlocked before they can be deployed by moving the feather handle into the feathered position.

There is a feathering handle that moves the feathers into the feathered position. Based on video evidence from inside SpaceShipTwo, the copilot unlocked the system, but the system deployed without any crew input.

Model of SpaceShipTwo in unfeathered position 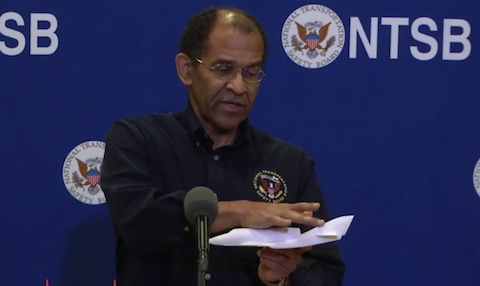 Model of SpaceShipTwo in feathered position 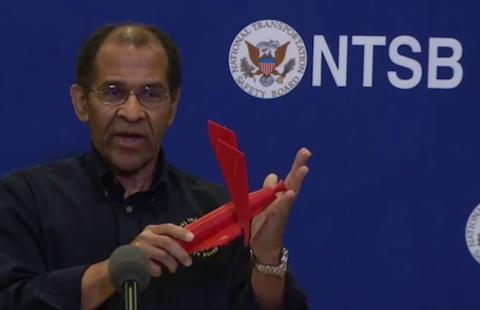 The sequence of events was roughly as follows:

The NTSB emphasized that their statements were statements of fact rather than a determination of a cause of the mishap. Below is a video of the third media briefing.

Summary of first two NTSB briefings on 1 November 2014
Both NTSB briefing were given by acting NTSB chair Christopher A. Hart, was short, and provided the following preliminary information about the accident: 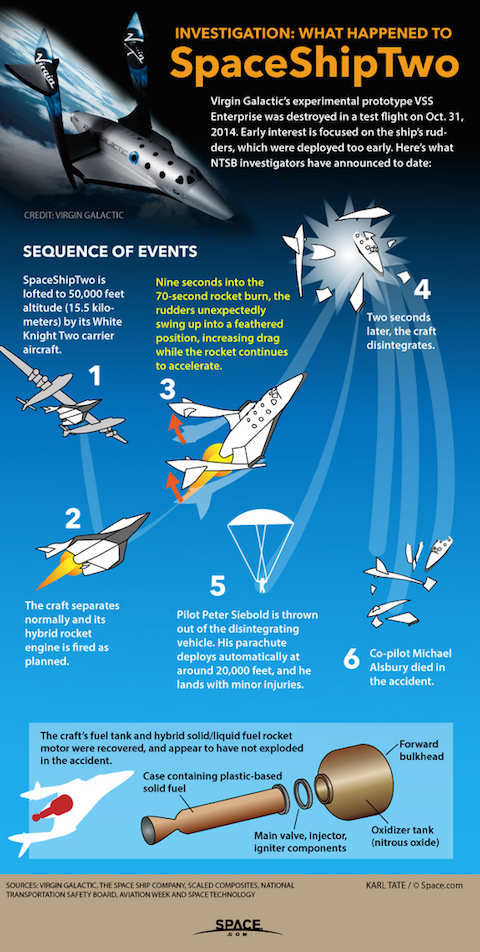