19 March 2016; flydubai 737-800; A6-FDN; flight FZ981; Rostov-on-Don, Russia: The aircraft was on a scheduled international flight from Dubai, UAE to Rostov-on-Don, Russia. The aircraft aborted its first landing approach, and entered a holding pattern for roughly an hour before its second attempt. During the second landing attempt, the crew indicated that they planed to execute a go-around procedure, the aircraft then entered a steep descent and crashed on the edge of the runway. All seven crew members and 55 passengers were killed.
Aviation Herald article about the crash
Other flydubai events
737 plane crashes

Below is an initial analysis of the crash based on multiple video recordings of the event and other information gathered from public sources. Following that section is a review of the published findings of the Interstate Aviation Committee of Russia, the organization conducting the accident investigation.

Analysis of views of the crash from multiple video cameras
Video #1: The following video shows what appears to be the final moments of flight FZ981. The aircraft is rapidly descending from left to right at a high angle before crashing and exploding. There appear to be one consistent area of light, with two smaller lighted areas that varied in intensity, one above and one below the larger lighted area.

Part of the foreground scene in video appears to match a street scene near the airport that was taken by a Google street level camera in 2013. Note that the Google Maps picture was apparently taken from the road, while the security camera seems to be from a higher position and, given the presence of additional trees in the foreground, set back from the road somewhat.

The following illustration, which uses a Google Earth overhead photo of the Rostov-on-Don airport area, shows the relative position of the security camera location, and the location of the initial flight FZ981 impact area, which was at the left side of runway 22, roughly 750 feet (230 meters) beyond the threshold of the runway. 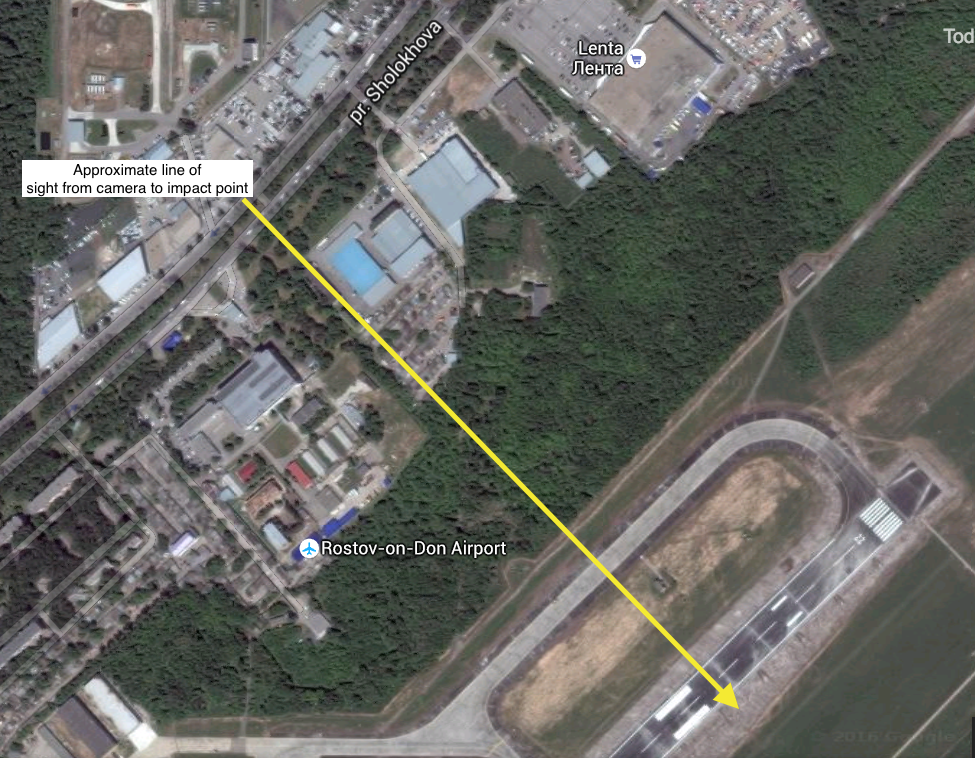 The following two frames from the video show the aircraft in two positions. In the first photo, a light, presumably one or more landing lights, from flight FZ981 appears as round white ball above the white vehicle and at the upper edge of the video frame. 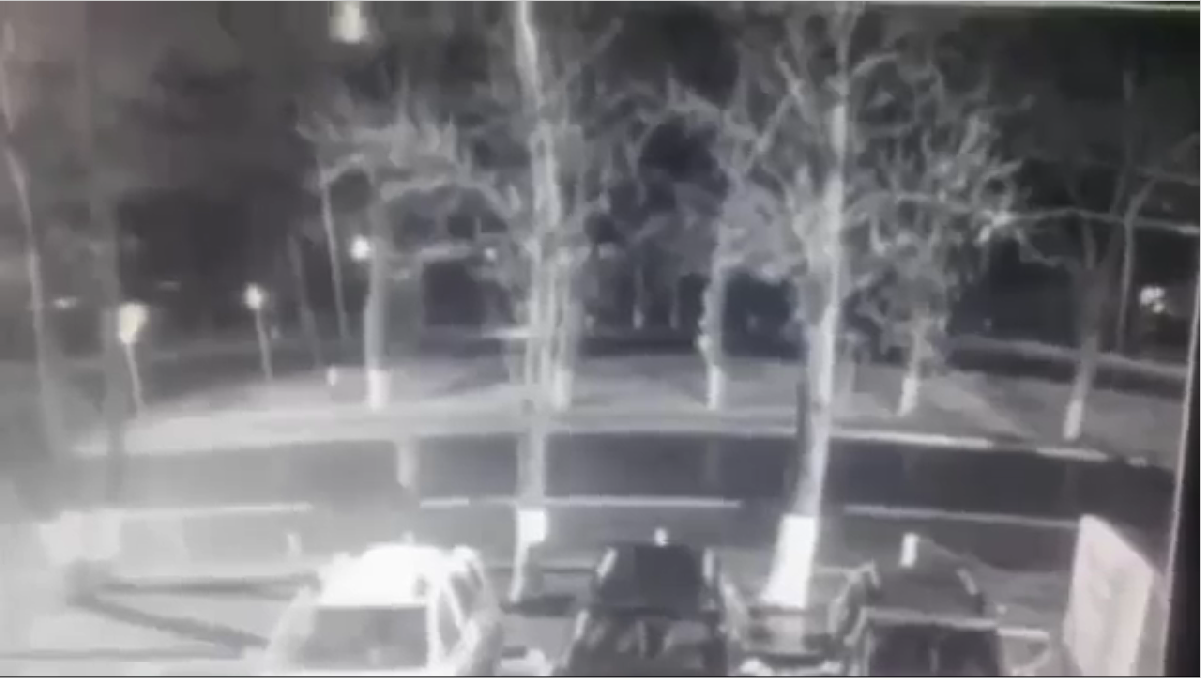 The next frame shows the light from the aircraft has moved down and to the right, and is still above the white vehicle. 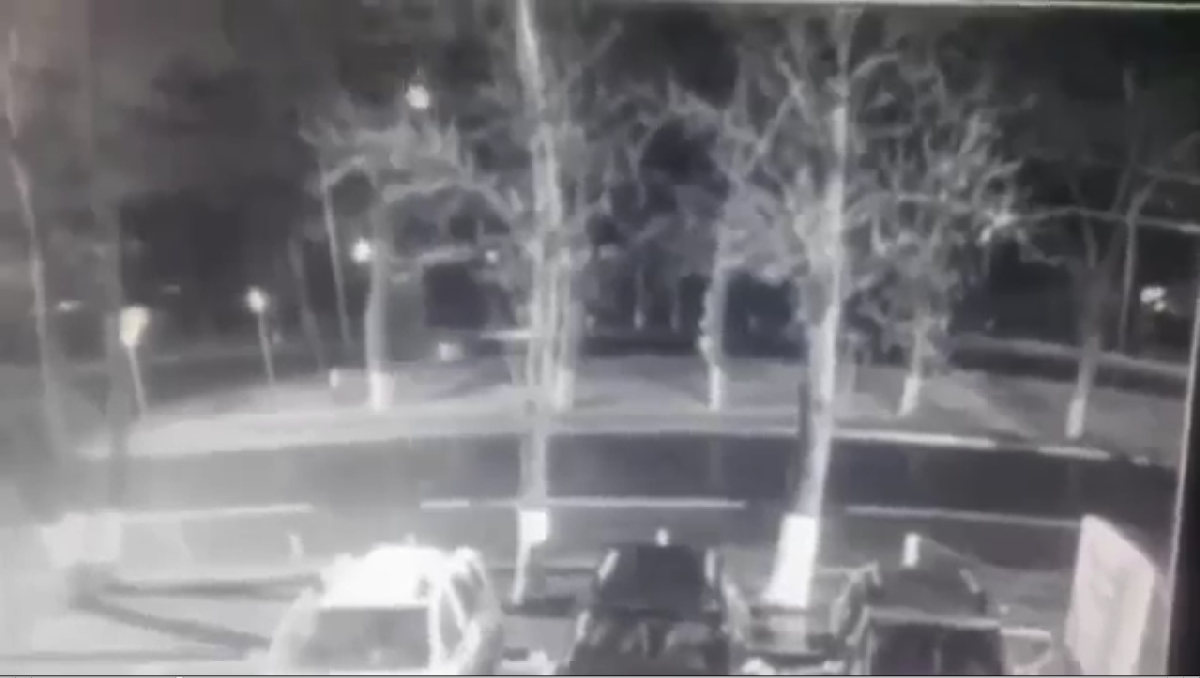 Based on the position of flight FZ281 in the second frame, the first frame has the following elements added, a small yellow circle indicating the position of the aircraft light in the second frame, a set of yellow arrows to give a sense of the flight path angles, a large red circle indicating the approximate location of the impact point and initial fireball in the video, plus a set of red arrows to indicate the relative vertical and horizontal position changes between where the aircraft light entered the frame and the position of the initial fireball. 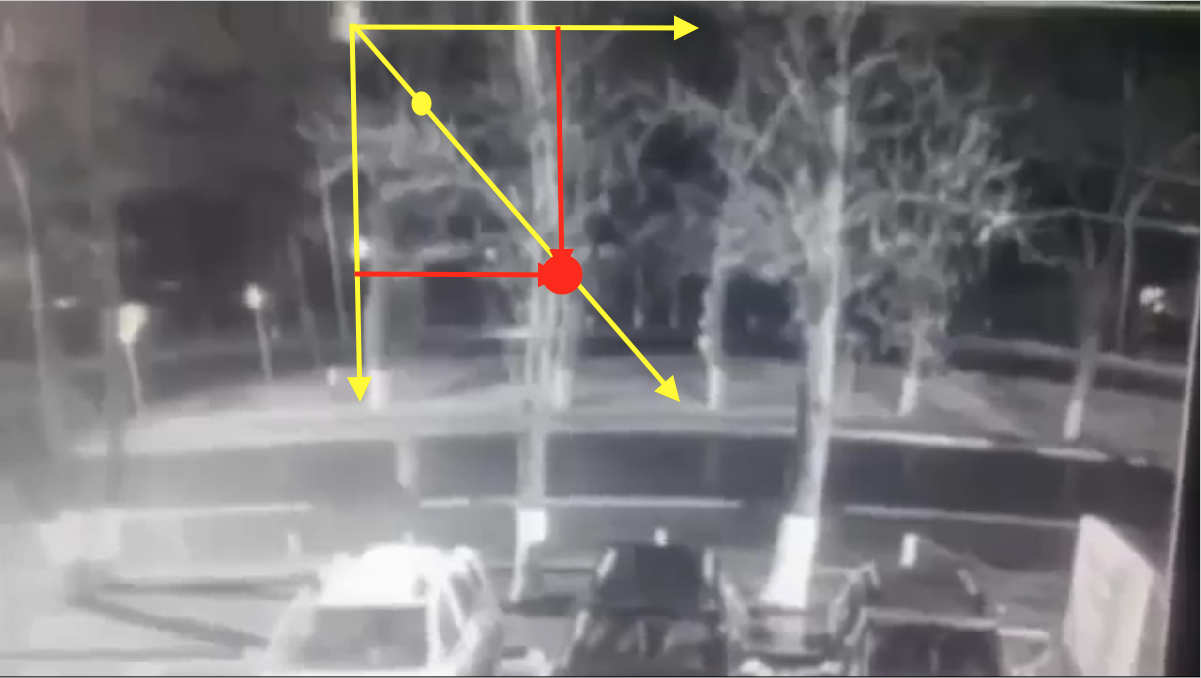 Given that the estimated position of the video is roughly abeam of the impact area, and the fact that the road in front of the camera is roughly parallel to the landing runway, if one assumes that the direction of flight was in line with the runway, then one can use the information in the graphic above to estimate that the flight path angle was between about 47 and 50 degrees, which is much higher than the typical flight path angle used by a 737 during a landing approach.

Videos #2 and #3: There are two video camera perspectives of the last moments of the flight provided by the Russian news agency LifeNews, one of which appears to show three areas of lights that would be consistent with the position of wingtip and landing lights of a 737, indicating that the aircraft was not in a wings level attitude shortly before impact.

Video #4: The fourth video, unlike the first three which were taken from the right side of the center line of the landing runway, was taken from the left side of the landing runway's center line. It shows the aircraft emerging from the bottom of the cloud layer and crashing about four seconds later. Unlike the other videos where at most three areas of lights were visible, there was a diamond formation of lights visible and this video, and at least one wingtip light appeared to blink before impact. Assuming that the rearward light was on the vertical fin, and that the light is not visible from below on a 737-800, this fourth video suggests that the aircraft was rolled to the left as it descended below the clouds.

Based on aircraft speed and position data provided by Flightradar24.com, the Radiant Physics company produced the following graphics that provide an overview of the landing attempts of flight FZ981. The first graphic focuses on the second attempt and the second graphic summarizes both attempts. 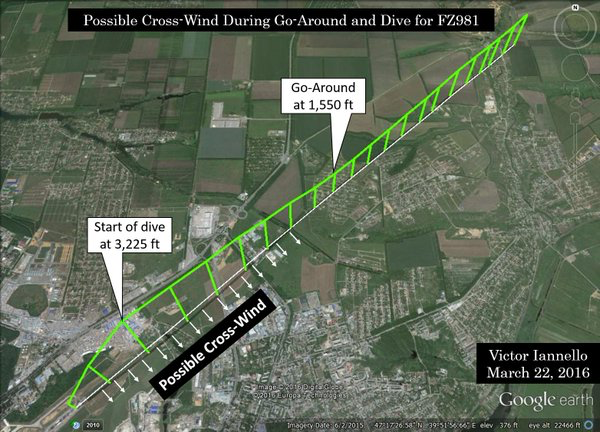 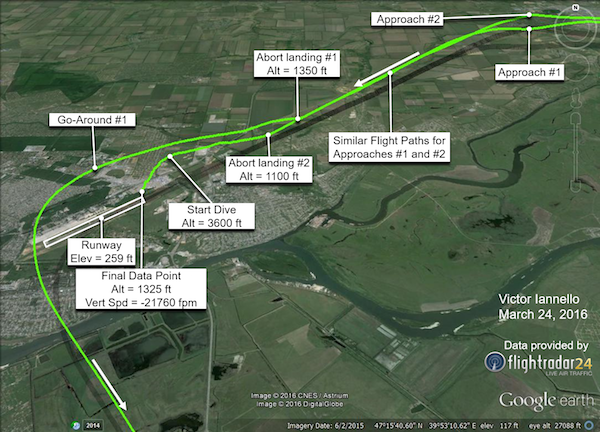 Interpretation of video information
Based on the illustration in the flight path graphic and other information from the three cameras that caught the last portion of the flight, it appears that in the final moments of flight FZ981, the aircraft was traveling at a downward angle of between 47 and 50 degrees, which is far higher than the typical flight path angle used during a landing attempt. Because there was at least three distinct areas of aircraft lighting visible in video footage from two of the cameras, the aircraft's electrical system was likely generating electrical current until the moment of impact.

In video footage from two of the cameras, both of which appeared to be taken from the right of the aircraft's flight path, the motion and relative positions of the three lights, if they were in fact two wingtip lights and a set of landing lights, were consistent with an aircraft in a nose-down attitude with the wings not level.

There was not enough information to clearly indicate if the aircraft was rolling or banking toward the left or the right shortly before impact. It was also not clear from reviewing the video footage if the aircraft was experiencing an aerodynamic stall or some other condition that would have impaired the crews ability to control the aircraft. 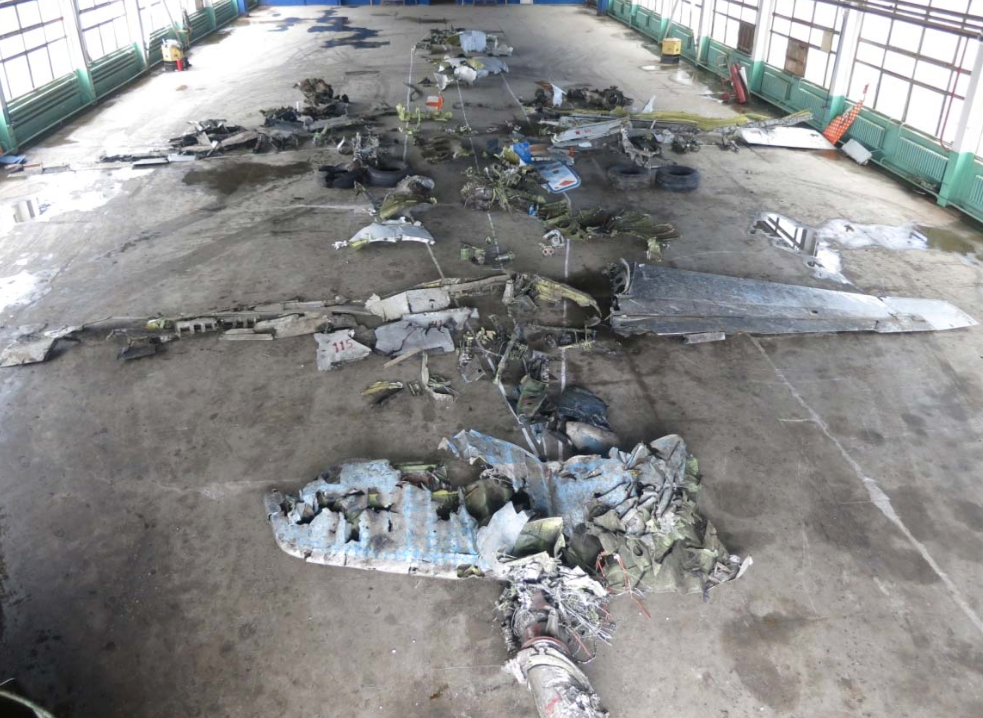 The interim report did not state any probable causes or contributing factors for the crash, but did publish a number of recommendations, including two recommendations for training 737-800 crews in go-around procedures in various conditions.